April 2011 Previous month Next month
Recently, I wrote about my comparison of the horizontal position obtained from a consumer-grade GPS receiver versus that obtained on a SmartPhone. Specifically, I compared a Garmin GPS 76 to an iPhone 4. The position recorded on my iPhone was consistently tens-of-meters off from the position recorded with my GPS receiver. Thus far, it appeared that my position as recorded by my GPS receiver is far more accurate than that from my iPhone. However, this was not the end of the story. 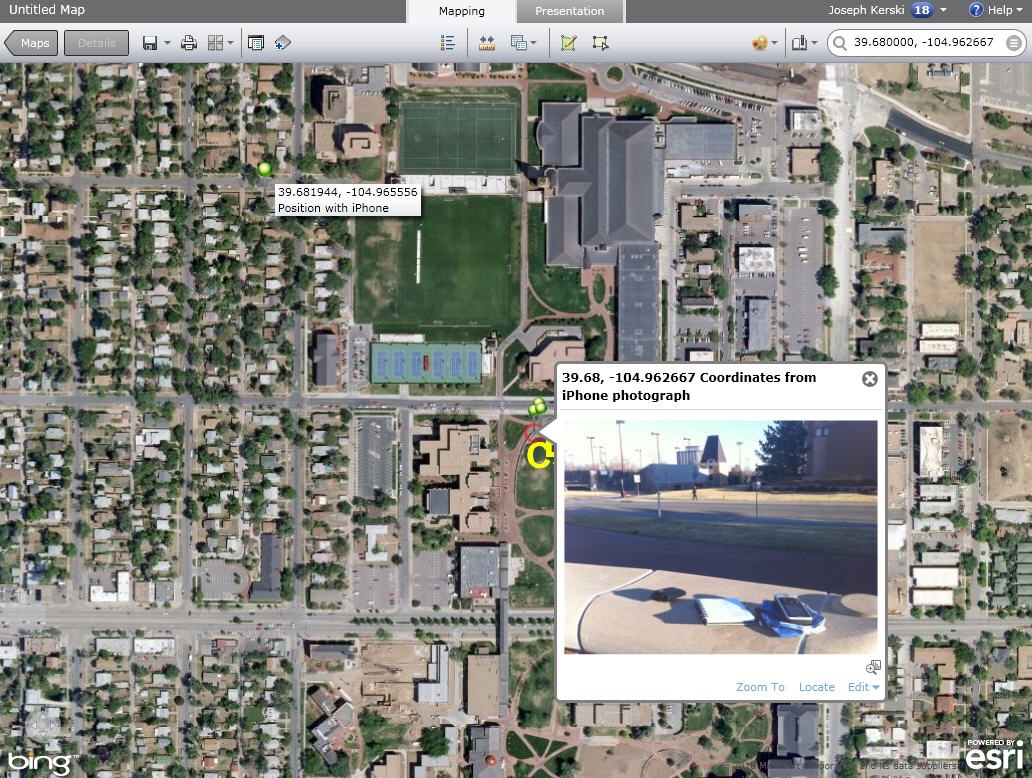 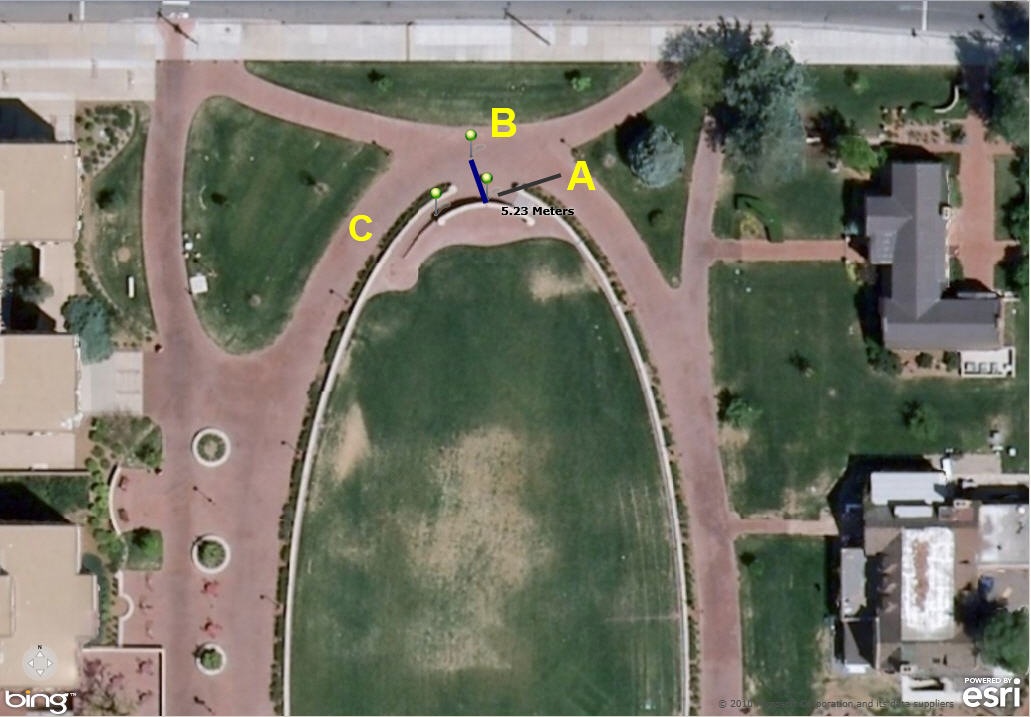 - Joseph Kerski, Education Manager
Recently I wrote about techniques to use photographs taken on a SmartPhone as hyperlinks to locations where you have collected field data using ArcGIS Online as your mapping platform. These photographs are geotagged with a latitude-longitude coordinate recorded at the time and location that the photograph is taken. But how accurate are those coordinates, and how do they compare to the accuracy of locations recorded by a GPS receiver? In other words, do I really need my GPS receiver any longer, since modern SmartPhones can capture positions using an embedded GPS chip and even supplement the GPS position by triangulating off cell phone towers? 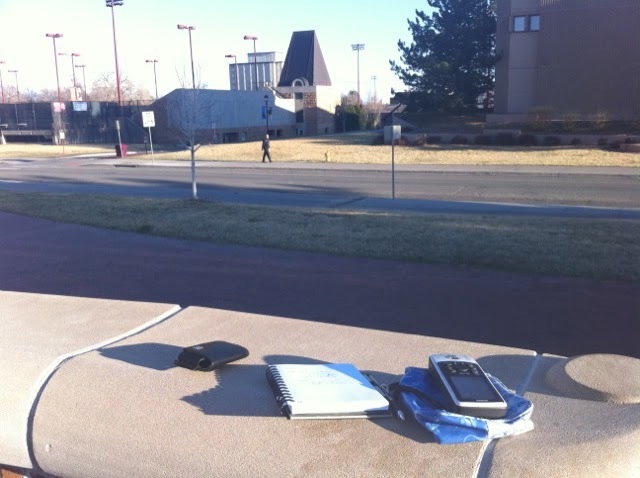 To find out, I recently conducted an experiment at a location I knew would be easily identifiable on a satellite image at the University of Denver. I compared the latitude and longitude positions gathered from a Garmin GPS 76 to those from an iPhone 4. My GPS dates from 2004 while my iPhone dates from 2010. The iPhone 3G, iPhone 3GS, and iPhone 4 models use A-GPS -- or "Assisted GPS" -- which in basic terms accesses an intermediary server when it is not possible to connect directly via satellite -- indoors, for example -- and this server provides the nearest satellite with additional information to make it possible to more accurately determine a users position. Also, the iPhone 3G, iPhone 3GS, and iPhone 4 also use "wi-fi hotspots and cellular towers to get the most accurate location fast" when GPS is not the most convenient method of location detection.

At the time of the experiment, my Garmin GPS 76 was reading 9 satellites and gave a horizontal accuracy of 4.38 meters (14.4 feet), with a latitude of 39.68006 degrees north and a longitude of 104.96262 degrees west. My iPhone gave me a position of 39.681944 degrees north and 104.965556 degrees west. The iPhone coordinates were more precise than those from my GPS receiver—they included more significant digits (6) to the right of the decimal point than the GPS included (5). But were the iPhone coordinates more accurate than that from the Garmin GPS receiver?

Learn more about geo-tools and the iOS: EdComm Geo-apps and iPhones | iPhones for geo-enabling your classroom | Esri's iOS development SDK

I mapped these two coordinates using ArcGIS Explorer Online with an imagery basemap. Using the measure tool, I determined that the GPS location was 5.23 meters away from my “true” position based on the satellite image. This assumes that the satellite image is “correct”, but remember that imagery is not perfect either, and what is considered “correct” is a subject worthy of further discussion in a different blog column.

The position recorded on my iPhone was 333 meters away from my position as identified on a satellite image. Multiple experiments and then a summary of the results would be proper. At the time of this writing, I only had time to conduct one other experiment, 200 kilometers away, at Northeast Junior College in Sterling, Colorado, where I was teaching GIS and GPS. At that location, my iPhone coordinates were 40 meters off and my Garmin GPS coordinates were 5 meters off from my position as identified on a satellite image base map. Therefore, given these two experiments, I would conclude at this point that yes, my position as recorded by my GPS receiver is far more accurate than the position as recorded on my iPhone.

However, this was not the end of the story, as I will explain in my next blog entry.

Many of us have encountered the following question from students: “What should I do for my GIS project?” Or, perhaps you are that student looking for a GIS project. While the best project is the one that students come up with themselves, sometimes, suggestions are helpful to get started. If you choose to provide suggestions, below are some that I have provided to GIS students at many times in the past.

I always encourage the student to discuss his or her thoughts with me or their peers rather than me providing a simple list. I encourage students to start with issues that they are most passionate about.   Don't pick something where you can easily find data, or even something your professor is interested in... pick something that you are interested in.

The United Nations Millennium Development Goals provide a good framework and starting point, because these goals that address poverty, health, education, and others can all benefit by the spatial perspective and spatial analysis through GIS (http://www.un.org/millenniumgoals/).

Along the same lines are issues raised by books in particular fields, such as the book Essentials of the Environment. Another rich source of ideas is the annual Esri Map Books: http://www.esri.com/mapmuseum. Each 2-page spread in these books features a problem solved through the application of GIS—anchored in hundreds of disciplines from agriculture to zoology. Along similar lines are the Esri industry pages (http://www.esri.com/industries), which give a good sense of the fields in which GIS is used with additional details through written stories and videos.

I encourage students to read scholarly and trade journals, and to skim GIS blogs, Facebook pages, and investigate ideas on GIS web news services such as Directions Magazine, GIS User, GIS Café, www.esri.com/news, and others. I encourage students to read local, regional, national, and international news to get a sense of issues of critical importance. In my local community, the top issues at the moment are deciding which schools to close in the wake of budget shortfalls, and mitigating and dealing with the aftermath of recent wildfires in the mountain foothills. In my state of Colorado, top issues include pine beetle infestation, designing urban greenways, extracting natural gas and oil shale, and an issue that has been with us for 150 years—water quality and availability. Just look around you. Current events from political instability to natural disasters to economic inequality, energy, water, and many more are valid foundations upon which to build GIS projects. 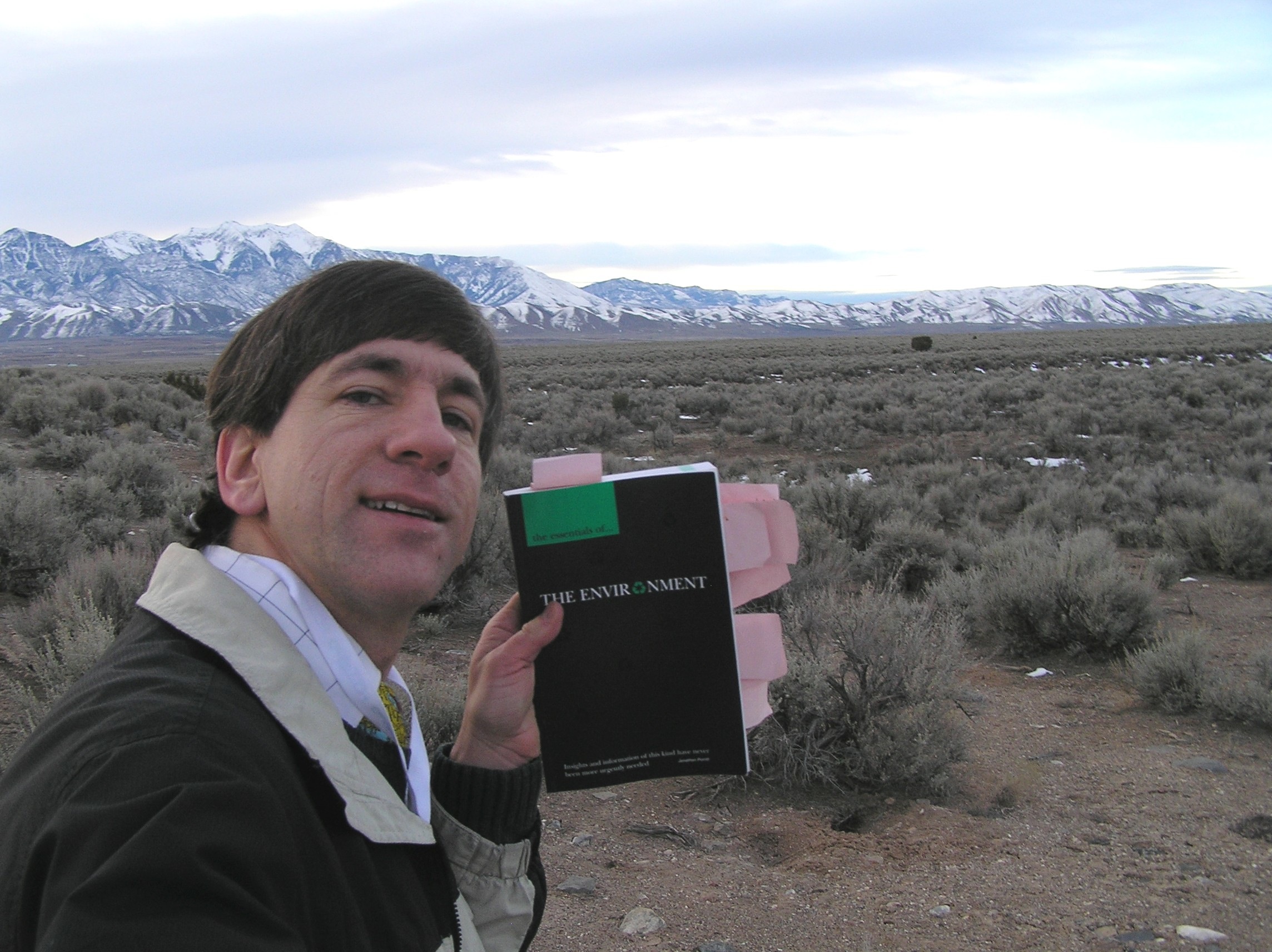 How do you respond to the question “what should do for my GIS project?”  Some of my best ideas come from when I am out in the field, such as here in Utah.