This blog post was originally posted to the ArcGIS blog page on May 23, 2019.

Since the last blog about Esri Vector Basemaps, we rolled out several data updates in our tile set. These changes include HERE commercial data updates, authoritative Community Maps Program contributions , Community Maps Editor additions of highly detailed “campus” areas, and open data updates. In addition to updated map content, several map styles were improved. The most notable change is in the World Navigation vector tile layer. The updated style allows for better use on mobile devices through Runtime as well as in ArcGIS Online and Pro applications. This separate blog post provides our cartographer’s insight to his Navigation redesign.

Turkish is our 18th language with localized maps, aside from our global English map. Each language displays in ten basemap styles. For localized language maps in your ArcGIS.com gallery, change your organization’s Region and Language in the General settings. Set Esri vector basemaps as the default gallery. This option is in the Map settings. More language updates are planned in future releases. Each link directs you to a group of web maps in that language:
Arabic | Chinese (Hong Kong) | Chinese (Taiwan) | Modern Chinese | Czech | Finnish | French| German | Hebrew | Italian | Japanese | Korean | Polish | Brazilian Portuguese | Russian |Spanish | Swedish | Turkish

Other Localization and Customization

Do you want one of your custom-styled Esri vector basemaps to displays a localized language? Our World_Basemap_v2 tile set includes the language data that allows you to do that. See the Esri Vector Basemap Reference Document (v2) for details on how to customize your map to expose translated labels. The reference document includes the list of layers supported and the 2-digit language code you apply to the json. Try starting with one of our existing localized map styles and apply your own cartographic styling. 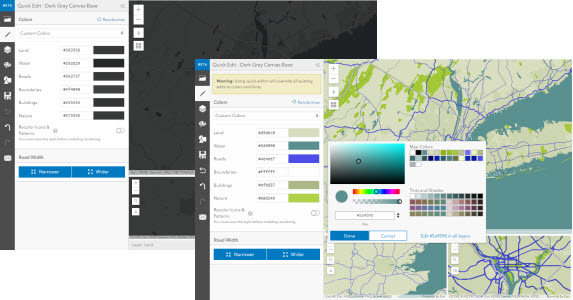 Customize the look of your own vector basemaps

In addition to language or geopolitical customization, you can also edit overall cartographic styling. Change the root.json code in a text editor and update your tile layer. Alternately, try the ArcGIS Vector Tile Style Editor (beta) app for a user-friendly styling experience.  The Quick Editor function changes groups of features on layers en masse.  In contrast, the editor also has an Edit Layer Styles option for a deep dive into individual map specifications. Change style settings for text, sprites, lines, polygons, and point features with the editor app. Use it to edit an Esri vector basemap style or your own vector tile layer created through ArcGIS Pro.

We also have a Customizing Esri’s Vector Basemaps series of story maps. Topics include the Basics, Color, Lines, Labels, and Sprites. These reference tools can help when you’re modifying an existing vector basemap or when you’re creating your own multi-scale vector maps.

The Vector Road Ahead

Stay tuned to this blog page and the vector basemap group for new vector basemap styles available in ArcGIS Online. Some new map styles are being built for specific apps while others  provide unique cartographic presentations of the Esri Vector Basemap tile set.

Have you ever seen a problem with Esri Vector Basemap data or display? Report issues directly on this Feedback Map. Our team reviews your comments and considers the update for one of our frequent releases.